Before I start this post, I wanted to apologize for not posting in a while as I have had an AP exam last week and I have exams this week 😦 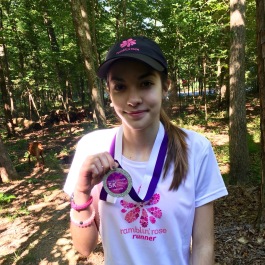 Last  Sunday the 15th I ran the first annual Ramblin’ Rose 5K in Raleigh – a race for women empowerment. It was a cold morning with a chilly wind. After putting on layers of clothes and standing indoors out of the weather I was called to come outside by the announcer as it was 15 minutes prior to the race. I took off of my jacket and pants and I warmed up with a quick run around the car park. Soon there was just 5 minutes to the race… and then it was time to go. I started off behind a few competitors with the route lead cyclist just in front of them. After about a mile I was settled into my pace as we entered the wooded loop, I decided to pass my competitors and began leading the race, behind the cyclist. I continued to lead with the guy on the bike chatting to me and telling me how much further we had to go – when I saw my Mum I knew that I was near the finish and that I would take first place. The race was great, I ran a time of 23.02, beating my Angels Among Us time by 38 seconds! I felt good throughout the race and the energy for the cause and positivity from the crowd was so high! A moment that stuck out to me during the race was the turn around point where all the runners ran around a large loop. I could see the other runners who were about to enter the loop. As I was the first to turn around on the loop all the other runners behind me were cheering me on and shouting out ‘you go girl’! I had a great time and cannot wait until next years run where I hope to beat my own record 🙂